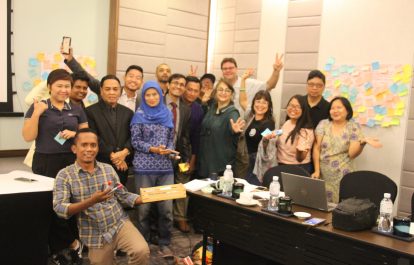 Welcome to the monthly e-bulletin of the South Asia Media Solidarity Network (SAMSN). The next bulletin will be sent on January 17, 2019, and your inputs are most welcome.

We encourage contributions to let others know about your activities; to seek solidarity and support from SAMSN members for your campaigns and initiatives. To contribute, email at: ifjsouthasia@gmail.com

Please feel free to distribute this bulletin widely among colleagues in the media. This e-bulletin and South Asia related content are available at the SAMSN Digital Hub: samsn.ifj.org 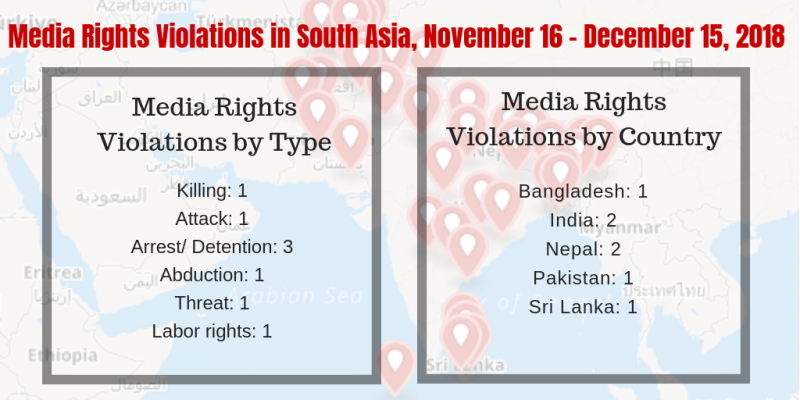 1. Journalist unions need to adapt to a digital ecosystem

‘Journalist unions need to adapt to the digital ecosystem and become inclusive to digital media workers to remain strong and relevant’ was one of the key messages from the two-day workshop of the union leaders and digital media activists from the Asia pacific region. The meeting held in Bangkok on November 3 and 4, explored the growing issues that unions need to address in order to adapt to the changing media industry and to ensure the protection and regulation of digital media.

Despite traditional media currently being accepted as the mainstream, digital media is slowly challenging them with it to soon overtake as the new mainstream media. However one of the more pressing issues mentioned in the meeting was how the rise of digital media will result with the introduction of online journalistic by-products  to the mainstream, such as fake news which can threaten the existing integrity of the media and journalist profession. Read more here.

The Delhi High Court passed an order on November 27 halting the retrenchment of 297 employees of the Press Trust of India (PTI). Justice C Hari Shankar passed the order on the petition filed by the Federation of PTI Employees Union saying the ‘arbitrary policy of the management didn’t follow the rules of retrenchment’. The PTI, the largest news agency in India incorporated in 1947, had laid off 297 staff across the country on September 29 through a notice by PTI’s Chief Administrative Officer.

IFJ affiliates NUJI and the IJU had joined other unions in expressing solidarity with the Federation of PTI Employees Union in their struggle against the retrenchment and had demanded that the retrenchment be withdrawn with immediate effect. Read more here.

Television journalist Kishorchandra Wangkhem was arrested twice for a Facebook video criticizing the ruling party, in Imphal, Manipur, India. Wangkhem, the former anchor and sub-editor at Information Service Television Network (ISTV), was arrested on November 20 after he posted a video criticising Chief Minister N Biren Singh and Prime Minister Narendra Modi on Facebook. The police charged him with sedition, inciting hatred and defamation. However, on November 26, the chief judicial magistrate of Imphal (West) district dismissed the charges of sedition and granted Wangkhem bail for the other charges.

He was arrested again within 24 hours under the draconian National Security Act (NSA) ‘with a view to prevent him from acting in any matter prejudicial to the security of the state and to the maintenance of public order’. On November 26, has been sentenced to a 12-month jail term – the maximum period of detention allowed under the Act. Read more here and here.

4. Over two thousand journalists jobless after newspapers shut in Pakistan

Pakistan’s largest publication house, the Jang Group of Newspapers, shut down five newspapers in various cities rendering hundreds of journalists and media workers jobless on December 16, 2018. The Jang Group announced the closure of Peshawar and Faisalabad editions of Jang daily and shut down its Karachi-based Urdu-language daily Awam and English-language Daily News along with Lahore-based Urdu daily Inqibal without a prior notice to the employees.

The Pakistan Federal Union of Journalists (PFUJ) also noted that Century Publications’ Urdu daily Express had closed its bureaus in Sukkur, Quetta, Gujranwala and Multan while the Herald Group of Publication shut down Herald monthly. The PFUJ estimated the total job loss in all these closures to be around 2,500. Read more here.

Noor ul Hassan from Royal News TV was killed and cameraman Sabir was injured on December 3, 2018 in Peshawar of the Khyber Pakhtunkhwa province, northwest Pakistan. Two gunmen on a motorcycle opened fire on a moving car in which the journalists were traveling from Peshawar to Hassan’s hometown Nowshera. The perpetrators were driving a 125cc motorcycle and fired shots from a 9mm pistol and fled the scene. The journalists were taken to a nearby hospital, where Hassan died to his wounds. Read more here.

Unidentified armed men abducted Engineer Zalmay, director and owner of the Enikass radio and television stations, after killing his driver on December 4 at Jalalabad, Nangarhar province in eastern Afghanistan. Zalmay was kidnapped at 5 pm during a shopping trip. He was taken by a group of armed men who arrived in an armoured vehicle. His driver was shot and taken to hospital where he later died. The police arrived at the area soon after the incident and cordoned off the scene. Enikass is a popular media group in eastern Afghanistan near Pakistani borders where the ISIS, the Taliban and other terrorist groups have an active presence. Read more here.

7. Press freedom and journalist safety under threat in Sri Lanka

During the two-month political turmoil that started with controversial appointment of former President Mahindra Rajapaksha as Prime Minister on October 26 to his resignation and subsequent re-appointment of Ranil Wickremasinghe, Sri Lankan journalists and media faced threats to press freedom and safety.

Several journalists were assaulted while covering the court appearance of the Chief of Defense Staff Ravindra Wijegunaratne at the Fort Magistrate’s Court, Colombo, Sri Lanka on November 28. Several photojournalists and cameramen who were at the court to cover the case were attacked by several men who arrived on motorcycles. The journalists were also threatened by the group not to record or take photographs of Wijegunarathne.

Sri Lanka’s government has transferred police inspector Nishantha Silva, who was investigating several major investigations into attacks on journalists during former president Mahinda Rajapaksha’s tenure out of the Criminal Investigation Department with immediate effect raising concerns about the future of his investigations.

Supporters of the United National Party (UNP) gathered outside the state-owned Associated Newspapers of Ceylon Limited (ANCL), also known as Lake House, threatening security while demanding the removal of the posters of former President Mahinda Rajapaksa on December 13. Police intervened and removed the UNP supporters.

Photojournalist Barsha Shah was arrested and detained for three hours for taking pictures of a protest outside the President’s Office at the Shital Niwas in Kathmandu, Nepal on December 13.

Police arrested Shah, associated with Deshsanchar.com, as she was taking pictures of the protesters who had reached the President’s residence to hand over a crowdfunded toy car as a symbolic protest to the government’s decision to purchase an expensive luxurious bullet-proof car. Police arrested Shah although she introduced herself as a photojournalist and showed her press card.  Read more here.

Nepal Police arrested Gopal Chand, the editor of an online news portal postpati.com, on November 27 under a cyber law for publishing news about a co-chairman of the ruling party. Editor Chand was arrested from Manamaiju, Kathmandu by the Central Intelligence Bureau (CIB) of Nepal Police after the online published a news that a local in Chitwan district attempted to attack former Prime Minister Pushpa Kamal Dahal ‘Prachanda’, also co-chairman of the ruling Nepal Communist Party, during a meeting. Police has accused Chand of spreading false information and charged under the Electronic Transaction Act. Read more here.

After 107 days in jail, acclaimed photographer Shahidul Alam was finally released on November 20, five days after he had secured permanent bail from the High Court. He walked out of Dhaka Central Jail in Keraniganj around 8:20pm In an instant reaction, Shahidul said, “We expect that in independent Bangladesh, people will be able to speak freely. If that does not happen, being inside [jail] or out in the open is the same.” Read more.

In an exclusive interview with DW, Alam said that the government tried all means to intimidate him during his incarceration. He also slammed curbs on the freedom of expression. He said: “A culture of fear and a lack of press freedom have created an intimidating environment for journalists. They face physical threats. Journalists are no longer practicing journalism. It’s easier to toe the government’s line, to be honest.” Read more.

Nepal Government’s spokesperson and Minister for Communication and IT Gokul Baskota warned media owners and journalists to think about their investment and their jobs while writing news stories that are unfavorable to the government. In a press conference organized at his office on November 30, he said media should not forget that the government is the main source of news as well as advertising revenue.

Accusing media of spreading ‘fake news’ against the government, Baskota, who is also minister for information and communication technology, cautioned that the media industry could find itself vulnerable if it didn’t stop publishing such kinds of news. Read more.

Senior Pakistani journalist Nusrat Javeed claimed on December 7 that he had survived a ‘deadly attack’ in the capital while returning home. Javeed said that he was driving to his home from G-8, Islamabad, when suddenly shots were fired at his car near the G-8 Imam Bara.

“Both the tires on the left side of my car were burst and completely damaged. Then six men in plain clothes came and inspected me… The plan was to kill me”, he said. “They must have thought that I’d be intoxicated and die in the accident but since I was sober, they left me alone”. Read more.

The censorship of Kashmir related content from social media, particularly by Facebook has become common, the ban on Free Press Kashmir being the latest in this series. On December 14, the social media page of Free Press Kashmir was banned from publishing by Facebook. They received a notification saying “the page has been unpublished.” There were no prior warning or notification given and the local news website was abruptly barred from posting anything on their social media platform. Read more.

Internet shutdowns are common in Kashmir. With the internet shutdown happening as frequently as 127 times a year, studies, business, news reporting and social life of the residents get affected to a great extent. As internet has become an important resource for the society, people in Kashmir – especially students, traders, journalists and web designers – have been suffering immensely due to the internet shutdown. Read more.

With less than a month to go to a general election, many journalists in Bangladesh say they are living in fear of ever-tightening media laws and engaging in self-censorship as a result. While Prime Minister Sheikh Hasina’s administration has won plaudits globally for welcoming hundreds of thousands of Rohingya refugees fleeing persecution in Myanmar, critics have lashed out at it for cracking down on free speech and an increasingly authoritarian rule.

In interviews Reuters conducted with 32 journalists and editors across print, digital and broadcast media in Bangladesh, the vast majority said the recent strengthening of defamation laws with a new Digital Security Act (DSA) has spread a climate of fear in the industry. Read more.