Welcome to the monthly e-bulletin of the South Asia Media Solidarity Network (SAMSN). The next bulletin will be sent on October 16, 2017, and your inputs are most welcome.

We encourage contributions to let others know your activities; to seek solidarity and support from SAMSN members for your campaigns and initiatives. To contribute, email Ujjwal Acharya at: ifjsouthasia(at)gmail(dot)com 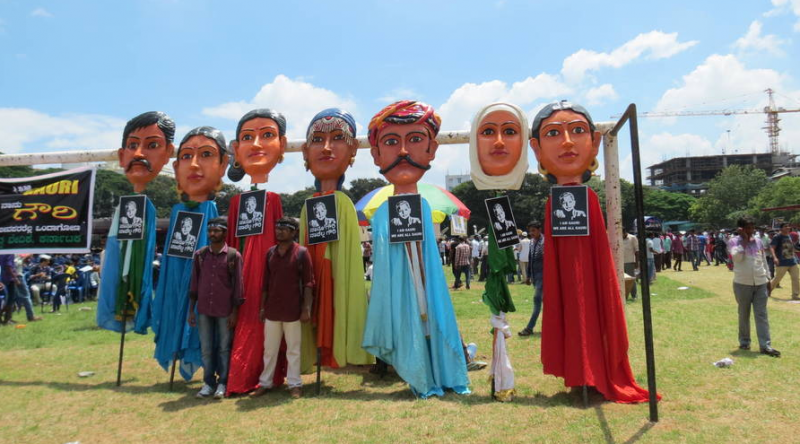 Photo from a rally and solidarity meeting organised by the “Forum Against the Assassination of Gauri Lankesh”, a broad coalition of progressive groups in Bangalore, India. Credit: Laxmi Murthy 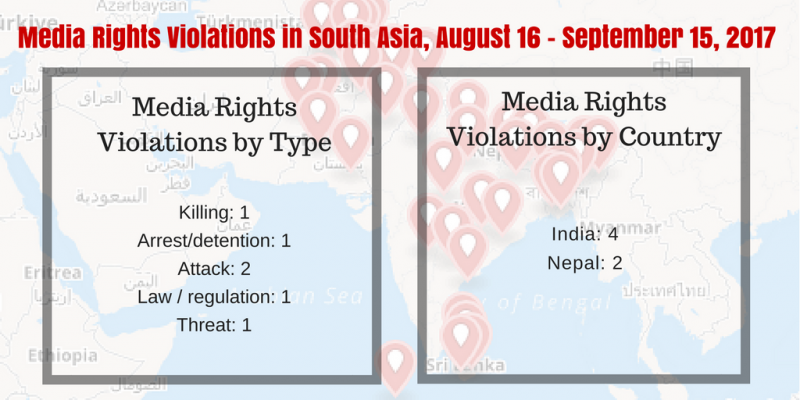 South Asian journalist unions and associations affiliated to the SAMSN and the IFJ resolved to build strong, united, democratic, independent, representative and self-sustaining unions ensuring meaningful representation of female journalists and youth in decision-making and leadership positions during a meeting in Kathmandu on September 8-10. Journalist leaders and representatives of unions from Afghanistan, Bangladesh, Bhutan, India, Maldives, Nepal, Pakistan and Sri Lanka convened for a meeting ‘Credibility, Safety and Equity: An Agenda for Change in South Asia’s Media’ supported by the Friedrich-Ebert Stiftung (FES).

Gauri Lankesh, 55, a respected veteran journalist and outspoken critic of Hindu nationalists, was shot dead outside her home in Rajarajeshwarinagar in Bengaluru, Karnataka, as she returned from work on September 5. Unidentified gunmen on a two-wheeler fired at least four shots at her as she entered through the gate of her home. Lankesh died at the scene after receiving gunshots to the head and chest. Lankesh edited and published a Kannada-language weekly newspaper Gauri Lankesh Patrike and wrote widely in the English media.

Local officials have said they suspected she had been under surveillance by the gunmen. Her murder has been widely condemned nationally and internationally, with Karnataka state’s chief minister Siddaramaiah calling it an “assassination on democracy” and ordering a probe by a Special Investigation Team (SIT). Read more.

The murder of veteran journalist and activist Gauri Lankesh in Bengaluru, Karnataka, on September 5, 2017 drew widespread condemnation and calls for justice. Many national and international media rights organizations condemned the murder and issued statements of solidarity. SAMSN Digital Hub has collected some here; and photos from demonstrations across India are here.  A Facebook community #IamGauri has emerged as a hub of information and campaigning.

After the self-styled ‘godman’ Gurmeet Ram Rahim Singh was found guilty by a special Central Bureau of Investigation (CBI) court, on charges of rape and sexual assault of two female devotees in 2002, his followers ran amok and attacked media vehicles and journalists in Haryana and Punjab on August 25. In the violence following the verdict, about 38 Indian citizens lost their lives and scores of others were injured.

At least four outdoor broadcasting (OB) vans of media houses – NDTV, Republic TV, India Today and E24 – were toppled, damaged and burnt near the court premises in Panchkula, Haryana. Apart from this, at least 38 media personnel have registered complaints with the police regarding loss of equipment and damage to vehicles. Reporter Rakesh Kumar and video journalist Shipendar Happy from PTC News were attacked and robbed in Sirsa, near Dera Sacha Sauda, the headquarters of Ram Rahim Singh.

Kamran Yusuf, a freelance photojournalist, was picked up in Kashmir, India on September 4 and continues to be detained. Yusuf, a 23-year-old native of Pulwama in South Kashmir who contributed photographs to several local newspapers including the Greater Kashmir, was arrested by the National Investigation Authority (NIA) on grounds of instigating stone pelting at security personnel and was transferred to New Delhi for interrogation the next day. He was sent to custody for 10 days and is yet to be formally charged. Read more.

6. Defamation lawsuit filed over reports of corruption in Nepal

Gopal Khadka, the Managing Director of state-owned Nepal Oil Corporation (NOC) filed a defamation case against Nagarik daily, claiming Rs 800 million (US$ 780,000) in damages on August 17, 2017 with an intention to silence the media house from publishing reports about his corruption. The Kathmandu District Court official served a notice to the daily’s directors Binod Raj Gyawali and Shova Gyawali, editor-in-chief Guna Raj Luintel and correspondent Dilip Paudel on September 1.

Nagarik daily published a series of investigative stories on corruption involved in the procurement of land by NOC in various parts of the country, the daily’s sister publication Republica reported. A parliamentary probe committee has investigated the issue and concluded that procurement procedures were not followed in purchase of the lands. The media house filed a counter-claim of Rs 1.5 billion. Read more.

7. Journalist threatened over news on fraud in Nepal

Umesh Paudel, a journalist with Naya Patrika daily, was threatened over a phone call by GP Paudel regarding news about a fraud business of crypto-currency on September 11. Paudel is one of the two journalists who reported ‘Gravity Currency’ as fraud business and named GP Paudel as the head of the business. After publication of the news, GP Paudel called the journalist and told him: “I know police officers all over Nepal. You have done your work, now, I will start what should be done to you.” Read more.

a. A rainsong for you Gauri Lankesh

Madhu Bhushan, fellow-Bangalorean and feminist activist recounts her meeting with the fiery and outspoken senior journalist-activist just hours before Gauri Lankesh was fatally shot at point blank range just outside her Bangalore home on September 5 by unknown assailants. More here.

A robust response to online violence against a woman editor prompts a well-known actor to urge his fans to stop the abuse, and one of the abusers to post an apology on Twitter. More here.

On August 5, 2017, Ghulam Rasool Burfat, working for Sindh Express newspaper was reported “missing” he was picked up from his residence in Sindh University Housing Society in Jamshoro. On August 9, 2017, Badal Nohani, secretary-general of Jamshoro Press Club, was taken away after masked people arrived in unknown vehicles. No word since his disappearance as his family held demonstration outside Hyderabad Press Club for Nohani’s safe return. No authority in Sindh government confirmed these journalists’. Read more here.

The Ministry of Communications, on August 7, 2017, issued (and notified) rules for shutting of telecom services – and by extension, the shutting down of Internet services in India. The notification for the rules is available here, issued under the Telegraph Act. India has already shut down internet on 43 occasions in 2017, the latest being one in Sikar district of Rajasthan as thousands of farmers hit the streets for remunerative crop prices, loan waiver and withdrawal of cattle trade ban. Read more here.

After the 15-year-long trial of two rape cases, Gurmeet Ram Rahim Singh has been sent to jail for the next 20 years. The verdict is awaited in two other cases–the murder of Ranjit Singh, the slain brother of the survivor victim sadhvi, and in the murder of Ram Chander Chhatrapati, the journalist who published Poora Sach, a local daily. When all the corporate media houses refused to publish the anonymous letter in the sadhvi episode, Chhatrapati published it and hence paid the ultimate price of his own life. Read more here.

Kashmiri users and activists have received official legal complaints from Twitter, warning that their online content could be acted upon in the future as well. This came after Twitter received a complaint from the Indian government, asking it block over 100 accounts and tweets that have been found “propagating objectionable content”. Most of the content and accounts appear to involve Kashmir and Kashmiri issues.  It is unclear how many accounts or tweets Twitter has officially blocked. Read more here.

The SAMSN meeting in Kathmandu endorsed a resolution on Twitter condemning the microblogging platform for acting on the Indian government’s arbitrary request to withhold tweets and warn users of action for ‘objectionable content’. The resolution urged Twitter to respect its users’ right to freedom of opinion and expression.

The 25th General Convention of the Federation of Nepali Journalists (FNJ) concluded on August 22 by electing a 45-member new working committee under president Govinda Acharya. Similarly, Bipul Pokharel has been elected as vice president (open category) and Dilip Thapa Magar as another vice president (inclusive category). Ramesh Bista and Ram Prasad Dahal have been elected as general secretary and secretary respectively under the open category.

If you have information on a press freedom violation or matters relating to media freedom and journalists’ rights in South Asia, contact staff at IFJ Asia-Pacific so that action can be taken. To contribute to this bulletin, email ifjsouthasia(at)gmail(dot)com